Infrastructure return correlations vs. other asset classes: effects on the efficient frontier and portfolio diversification

Correlations are very low between private infrastructure and other asset classes. Including infrastructure debt in a fixed income portfolio favourably shifts the efficient frontier.

The global recession of 2008-09 showed that correlations are dynamic and can change dramatically, particularly if affected by exogenous shocks. As a result, investors are increasingly seeking ways to diversify their portfolios as a means to maintain a relatively low level of correlation among the many asset classes to which they have exposure. 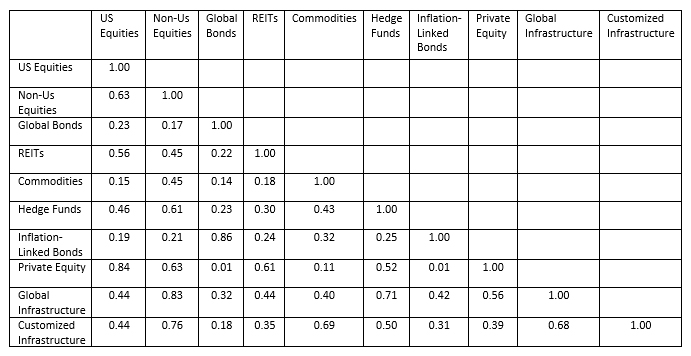 The practical benefits of adding infrastructure to a portfolio are an improvement in the risk-return profile (i.e., a higher Sharpe Ratio) and a beneficial shift in the efficient frontier, allowing for lower risk with little effect on return.(3)?

We performed an analysis to investigate how including an allocation of infrastructure loans with an average duration of 7 years affects the efficient frontier on a Baa 5- and 10-year Euro-corporate bond portfolio.(4)?Based on historical data from 2005 through to 2011, which is through the financial crisis, infrastructure loans demonstrated very little return correlation to corporate bonds and their inclusion in the portfolio resulted in approximately a 30% reduction in risk, with almost no reduction in returns in the tangency portfolio (see?Exhibit 2). This analysis considers senior infrastructure loans. Based on our experience, by including mezzanine infrastructure the returns would be higher without a material increase in portfolio risk (i.e., the standard deviation of returns). Mezzanine loans are mostly in the private market, are relatively illiquid and still benefit from stable project cash flows.

Exhibit 2. Efficient frontier with the inclusion of infrastructure loans in a corporate bond portfolio

The output of the distributions from the Sequoiaanalysis is shown in?Exhibits 3?and?4:

It is notable how low the return correlation is between infrastructure loans and corporate bonds, at less than 10%, as well as how low the corresponding covariances are. These correlations are in line with the study of private unlisted infrastructure funds in the Australian market discussed above.

Because infrastructure has such low inter- and intra-market correlation, this asset class benefits from diversification more than other asset classes do. The most optimal way for most investors to benefit from this characteristic is?to invest through a fund because it is easier to get exposure to assets diversified by region, country, sector and sub-sector. Low correlation also implies lower tail risk (i.e., a lower probability of a large unexpected loss), which has taken on heightened importance after the financial crisis of 2007-08.

Due to low infrastructure correlation, portfolio risk drops rapidly and tail risk is reduced as assets are added as shown in?Exhibit 5. Our analysis shows that 17-18 infrastructure assets diversify away 70-80% of the idiosyncratic portfolio risk. By comparison, 70+ normal correlation assets (e.g., leveraged loans) would be needed to achieve the same amount of risk reduction. This is indeed the typical number of loans a CLO needs to achieve the diversity score required by the rating agencies. This means the manager would more or less have to ‘buy the market’ and therefore would have much less scope to find positive alpha assets.

By not needing as many assets to achieve the same level of diversity, an infrastructure manager can pick their exposures more carefully, looking for optimal risk-return opportunities.

(4) Sequoia, “Effect of Including Infrastructure Debt on the Efficient Frontier of a Fixed Income Portfolio,” Jan 2012.

By clicking on 'Accept' you are consenting to the use of performance and functional cookies, designed to give you the best experience on our website.

You can find out more about which cookies we are using or switch them off in settings.

This website uses cookies so that we can provide you with the best user experience possible. Cookie information is stored in your browser and performs functions such as recognising you when you return to our website and helping our team to understand which sections of the website you find most interesting and useful.

Strictly Necessary Cookie should be enabled at all times so that we can save your preferences for cookie settings.

If you disable this cookie, we will not be able to save your preferences. This means that every time you visit this website you will need to enable or disable cookies again.

These cookies allow us to count visits and traffic so we can measure and improve the performance of our site. They help us to know which pages are the most and least popular, and see how visitors move around the site.

Please enable Strictly Necessary Cookies first so that we can save your preferences!